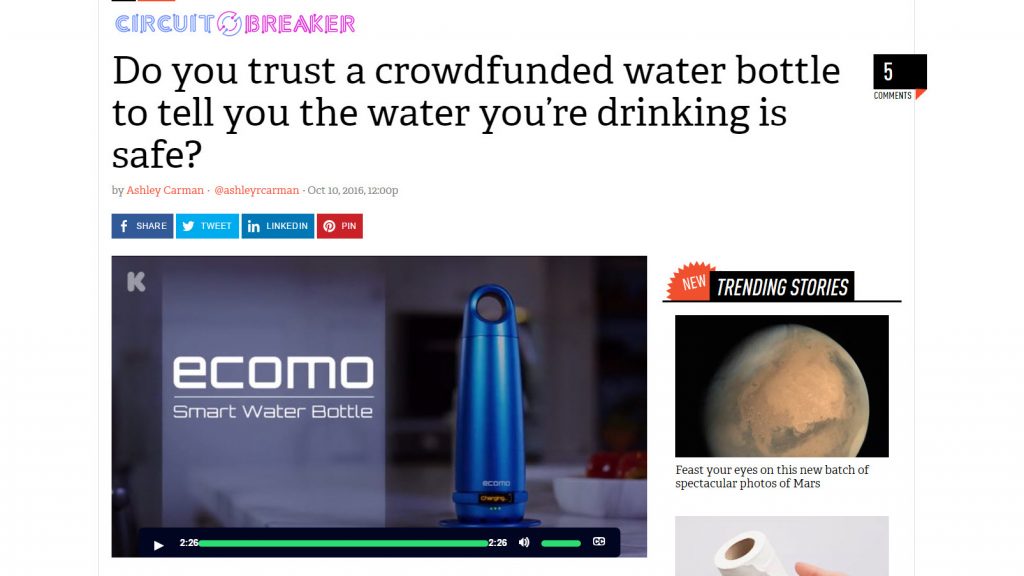 Today, technology and lifestyle site, The Verge, covered an interesting crowdfunding project for a connected water bottle that can allegedly test and filter water. The bottle is from a company called Ecomo and makes lofty claims that its products will “protect public health and the environment.”

Ashley Carman, the reporter from The Verge that covered Ecomo, dug deep into the company’s product, calling it a “fear-mongering gadget.” Carman took issue with Ecomo’s lofty claims and its flimsy scientific evidence.

Let’s take a look at how skepticism can make or break your crowdfunding campaign if you’re prepared for it.

It’s OK if you truly believe that your product will be revolutionary, but you have to convince everyone of it too. Not just your prospective customers, but the press as well, as that’s who people look to for purchasing advice.

If you make lofty claims, you had better be ready to back them up. In the case of Ecomo, it’s Kickstarter page is full of flashy video and animations with very little substance. The promo video shows a couple testing water at various places without actually showing how the product worked.

There are additional videos explaining how the filtering process works, but the videos only make claims instead of backing them up with science. In one video, Ecomo CEO Eric Li speaks with an Assistant Professor at The University of North Carolina at Charlotte. The video shows how the University’s lab tests water, but doesn’t even show the Ecomo bottle, resulting in even more skepticism about whether or not the product actually works.

Carman also takes issue with Ecomo for fear mongering, as the company claims the water that comes out of your tap is “bad.” While there are outliers like Flint, Michigan, the majority of the tap water in the United States is a considered safe to drink.

Take this above Last Week Tonight segment for example. Host John Oliver digs into the Flint water crisis only to pivot the conversation about lead poisoning and not contaminated water. Oliver calls out lead poisoning from sources other than water as much more of an urgent issue.

Looking at Ecomo’s “data” about its filtration system is an exercise in frustration. The company throws out scientific jargon like “Total Organic Carbon” and “Turbidity” without explaining what that actually means, rendering the accompanying graphics completely irrelevant.

The moral of the story? If you’re going to make lofty claims, you had better be ready to back them up with compelling evidence.