The team behind Spyra One, the next generation water gun, agree that nothing beats the summer fun of a classic water fight. What drove founder Sebastian Walter to get the ball rolling on the project was that there had not been any notable advancements in water gun technology for years. Now that Spyra has entered the scene, this is no longer the case.

Spyra was launched as a company in 2015 by Walter and co-founders Rike Brand and Marius Rudolf, who were equally appalled by the lack of innovation in water fights. Today, Spyra is headquartered in Munich, Germany, and has grown to include seven team members who specialize in mechanical and electrical engineering. Their product—the Spyra One—is a unique water gun that shoots consistent-pressured water bullets, has a digital display, and auto-refill capacity. It is the Tesla of water guns you’ve always dreamed of.

About a month ago, the Spyra team launched a crowdfunding campaign on Kickstarter with the hope of raising enough money to launch production of the Spyra One for the mass market. As of today, they have three days to go in their campaign, and have managed to raise $491,924 of their $59,219 goal. This phenomenal success was achieved with 2,594 backers—and counting.

How did they do it?

We sat down with Spyra’s head of sales, Marius Rudolf, to pick his brain about the tools and strategies that helped the company surpass its funding goal so spectacularly. Below, you’ll find excerpts of our discussion, as well as some easy to follow tips and tricks.

Building a Successful Campaign on Kickstarter 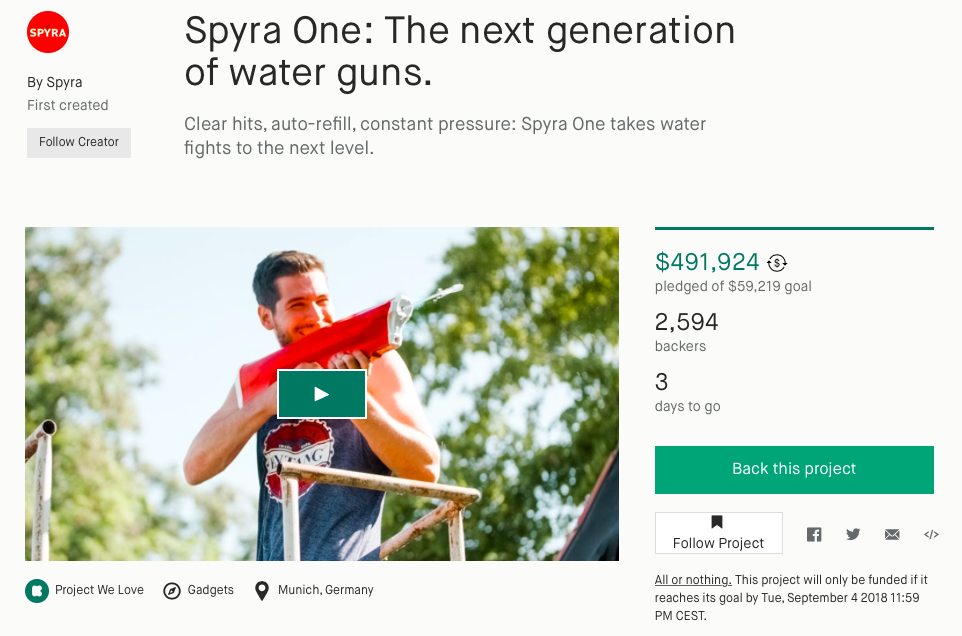 “There isn’t a single day when we don’t have challenges,” says Rudolf. “There are so many new things we have to approach every other day. I mean, just to find investors, just to learn how to reach customers, we all have different backgrounds and we bring a lot to the table, but everything is a challenge when you’re doing your own project, when you’re creating your own company.”

To be sure, launching a product in any context—let alone a crowdfunding one—is a major challenge. Having the right team assembled is the first step, and it doesn’t get much easier from there. The most important thing, explains Rudolf, is to put in the effort. You have to be willing to work a 60-hour week and be online every minute. “You just have to be prepared that things are not going to be working out as you imagined. A lot of things sound so easy, look so easy, but as soon as you dive into the details, it gets complicated. At that point, you just have to overcome it and just stay focused on what you want to achieve.” In other words, it’s often about having the right mindset and powering through rough periods when it seems like everything could fall apart.

When we ask Rudolf why Spyra decided to source funds through Kickstarter, he says that there are a lot of advantages that come with crowdfunding. The Spyra team decided to use crowdfunding early on, because they knew that Kickstarter in particular was a hub that attracted many early adopters. Since their product was going to be targeted at that kind of audience, they chose the platform that would enable them to reach early adopters the most effectively. “On Kickstarter, there are a lot of people who like new products which are not common and maybe don’t have a particular use case. With Kickstarter, you can target exactly those people, basically people like us.”

Once you have found your audience and the crowdfunding platform that best represents them, it’s time to jump into the details of the campaign. Rudolf notes that preparation is everything when it comes to crowdfunding. “We did a lot for our pre-launch,” he says, “we collected email addresses, we had one of the biggest private German television channels do a show on our launch day, and we also had a couple of press releases prepared—all this just for the launch.” In crowdfunding, the biggest mistake you can make is to assume that all the work has to happen after the campaign opens. As it turns out, most of the work must be done beforehand; the more you prepare, the more fruitful your campaign will be. “For us, almost all the effort was put in before the campaign, and now we are just benefiting from everything that we did,” says Rudolf.

Another reason why preparing as much as possible before your campaign launches is so important, is that during the campaign you need to have the manpower to communicate with your base. “You need to be really answering questions and not have to do a lot of things on the side,” notes Rudolf. Contributors can get anxious once they have pledged money, so it is important to have at least one person on your team dedicated to communication.

If you are crowdfunding for a product that will not be available in the market until after the campaign, and sometimes much later than the campaign officially ends, it can be difficult to manage your contributors expectations. Spyra has had to deal with this problem, because the Spyra One won’t be available until summer 2019. “I hope that most people are aware when they do the purchase that there is a wait time, and the best way to keep them interested is by sharing the interesting production processes coming towards us,” explains Rudolf. Keeping your contributors in the loop is the best way to ensure their trust in you, and their patience. “We want to be really transparent,” says Rudolf, “and share information with our community, we want to communicate everything.”

To conclude our interview, we asked Rudolf what he thought were some of the most important things to remember when launching a crowdfunding campaign…

To learn more about Spyra and support the campaign visit their Kickstarter page.